My Archaeological Experience in Cambodia

For those who don’t know, I decided to volunteer this summer at an archaeological dig in Cambodia. P’teah Cambodia: ProjecT Excavating Ancient Households was an excavation lead by Drs. Miriam Stark and Alison Carter. The goal of the dig was to discover how people lived back during the Pre-Angkorian, Angkorian, and Post-Angkorian periods. While scientists are still regularly studying the Angkorian temples, much more is known about them while there is still so much to discover regarding how people lived and what their homes were like in the surrounding areas. You see, the temple research focuses on the elite, and the farther away you get from these larger temples, the more you can see how the regular people of society lived.

The site of the excavation was just behind Prasat Basaet, a small sandstone temple just northeast of Battambang. I knew little about archaeology going into it, but I have always been interested in it, and I thought this would be a great opportunity to volunteer, learn, and gain a truly unique experience. 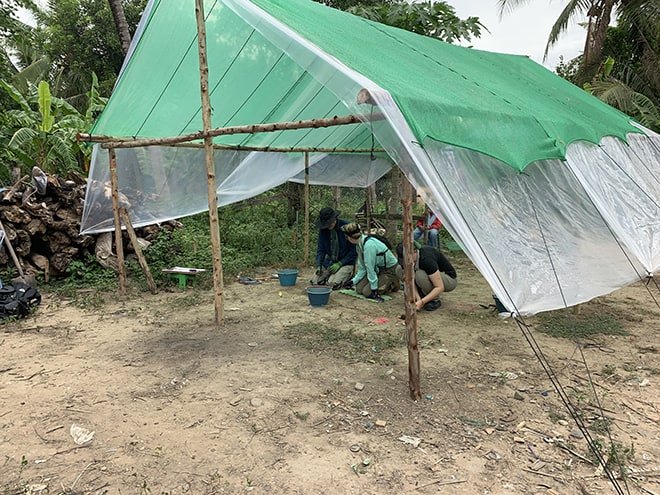 My journey began as I flew 14 hours from Los Angeles to Shanghai. After a 14-hour layover and a fun day at Disneyland Shanghai, I flew the last 4 hours from Shanghai, China to Siem Reap, Cambodia.

My first day in Cambodia was spent exploring the Temples of Angkor. After a full day of exploration and some nice relaxation and food at the Park Hyatt (which I can comfortably say is the nicest hotel in all of Cambodia), I went to sleep ready to meet up with my team the following morning.

After a hearty breakfast that morning, I took a tuk-tuk (which is basically a carriage pulled by a motorbike- and a much cheaper way to get around in Cambodia) to our meeting spot. After meeting my driver and three other volunteers, we began our journey southwest to Battambang. Three and a half hours later, after an extremely bumpy car ride due to the construction, we arrived at The Coconut House, our home for the next bit of time. Something different that I noted about the driving in Cambodia is that most roads are one lane, so people would constantly pass each other. While passing, a driver would honk at the car, tuk tuk, or bike they were passing to ensure they knew they were beside them. They were very vocal drivers with their horns in that way, but it was all for the safety of everyone. There are also cows and oxen all around you as you drive through the countryside.

Now, I had never been to Asia before, let alone Southeast Asia or Cambodia. I don’t know what I expected, but Cambodia is one of the top poorest countries in the world, with an average household income of roughly $1,300 per year. That being said, things are obviously very different there than in the United States. But I loved the new experience. I find it thrilling to experience new cultures and ways of life. While our living situation while we were there was nice, most families live without luxuries. 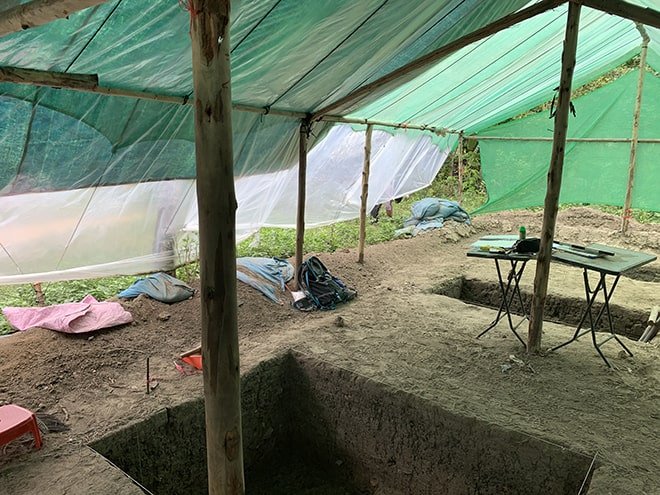 Somehow, I was prepared for the bathroom situation. I carried my own toilet paper in my field bag with me at all times. That was wise, as there isn’t toilet paper in the vast majority of the Cambodian restrooms. The toilets there in Battambang can’t flush toilet paper, so some provided wastebaskets for it. Others didn’t. For those, one must carry a plastic bag to put their toilet paper in until finding a waste basket. Some toilets flushed. Others had basins next to them for you to scoop water and dump it into the toilet, flushing it in a manual way.

Aside from that, the people were charming, and the markets were lively!

On the day of my arrival in Battambang, I met with Miriam who took myself and another volunteer out with her family to see one of the temples in the area. This one was up a large flight of stairs built into a hill. It was a steep climb, but the view was breathtaking. Miriam told me all about the history of Battambang and told me about the classic homes compared to the new. As we drove to the monument, people were casually cooking on the side of the road where people could cheaply stop to sit and eat. Her family was very kind, and Miriam, herself, was genuinely ready to share all of her knowledge and to learn more about me and the other volunteers. 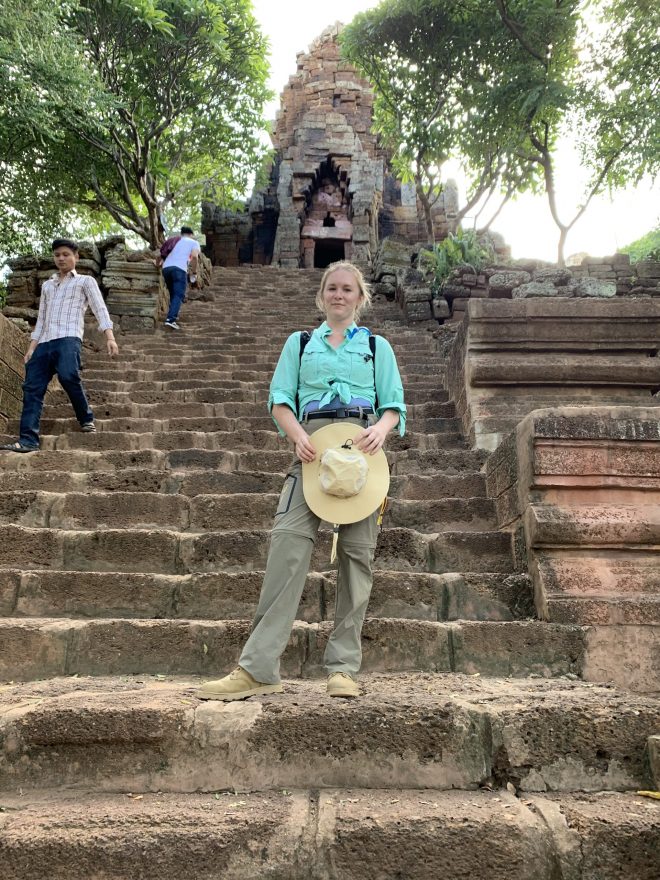 She also told me about spirit houses. The Khmer people believe that each building has its spirits, so to keep the spirits from haunting their home, they have a spirit house (which honestly almost looks like a fancy mailbox) in front of their home for the spirits to live in. I didn’t see one home without a spirit house. That was truly fascinating to me.

As for the work, during our weekdays, I learned so much about archaeology. Two other volunteer and I were given our own trench to excavate. We were first taught how to map, measure, and dig our trench appropriately, so our mornings were spent digging from around 8am-noon. It was definitely hot and humid; we wore full quick-dry hiking pants and long-sleeve hiking shirts most of the time to keep protected from the sun and the mosquitos, as Dengue was a real threat. (I actually never had a moment without being coated in powerful bug spray with a high deet because of this. I would step out of the shower, and the first thing I did was apply more every day.) We were kindly given traditional Cambodian scarves to wear, as well, so we could use them to wipe off the sweat as we were working. Needless to say, I washed mine daily in the sink. Temperatures could get between 90 and 100 degrees Fahrenheit, and the humidity was always pretty high. 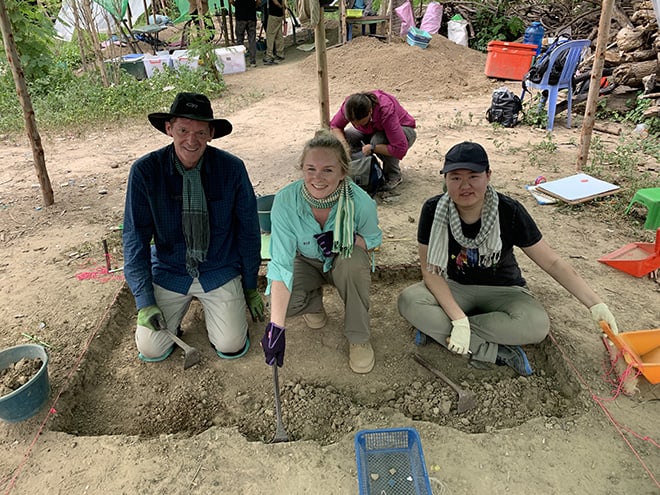 With our mornings in the trench, we excavated first in 10cm levels before cutting it down to 5cm. We found countless pottery sherds in every layer, as well as small animal bones. One day, we actually found an extremely large sherd in excellent condition. There was also a lot of fired clay to be found in our area. I was excited by the fact that at the end of my journey I could easily tell the difference between fired clay, sherds, and animal bones.

Lunch was always served at noon, and it consisted of rice with traditional Khmer dishes and a fruit for dessert. We ate under the shade of a pagoda, and we were very excited on the days where the ice cream man would ride by on his bike and offer us popsicles. He began to pick up on our lunch time and would regularly come by.

Our afternoons consisted of sherd washing, as it just got too hot and humid in the trenches for me to keep digging. Cambodian afternoons would be extremely warm until it randomly burst into rain for short periods at a time. The sherd washing was my zen after the mornings in the field. 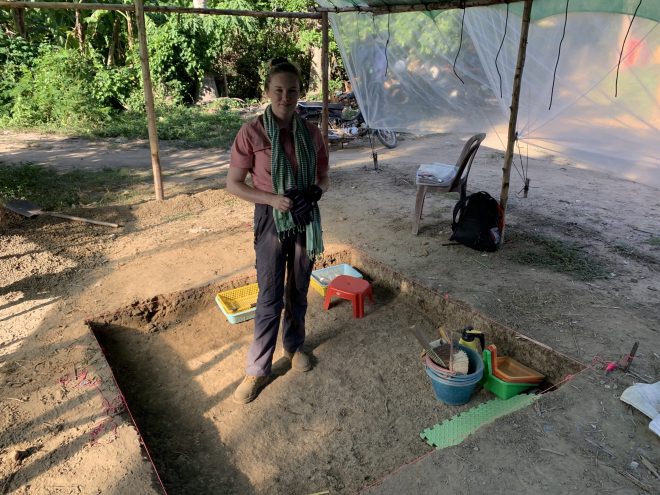 Our evenings consisted of a family-style dinner with more white rice and traditional Khmer plates. The Coconut House made the best fruit smoothies (thought they referred to them as shakes), so I would get one of those nightly before occasionally taking a dip in the pool.

One night, we all decided to take a trip to the circus, and it was an incredible adventure. We ate at “La Pizza,” which was delicious, before heading out to the circus tent. It was part of an art school where the students graduated and moved on to the circus in Siem Reap. The show was great- consisting of traditional dancing, acrobatics, juggling with fire, and one guy who would balance on alarming amounts of things at once.

Everything was so affordable in Cambodia that I only spent a little over $100 while there- and I was splurging.

The experience was truly once in a lifetime. I learned so much about the Cambodian culture and  archaeology and lived like a true adventurer walking to the expedition site daily from the temple to the site behind it. My trip truly reminded me why I love travel. I think it’s so important for everyone to see as much of the world as they can. It’s so important to see how others live so you can appreciate what you have and become more educated and open-minded.