“This is the Empire of the Dead”- The Catacombs of Paris

The Catacombs of Paris are, perhaps, one of the most interesting places to visit in Paris. They are eerily beautiful and still. Yes, the catacombs are touristy, but no more than any other attraction in the city. In fact, you will find many locals there, as well. This spot is such a gem that you have to arrive extremely early to avoid the rush of people trying to get in to see it, as they only allow a certain number of visitors down within the tunnels at one time.

Lucky for me, my hotel was less than a block from the entrance to the ossuary. Since I was going on a Saturday, I arrived at the entrance of the catacombs at 9am, despite this famous attraction not opening until 10am. If you want to get in at a reasonable time, you must begin waiting about an hour before opening. I was approximately 20th in line when I arrived. By the time they opened the gates, there was a line wrapping around the street. People that arrived upon opening would already be waiting a couple of hours to enter. So, why not arrive an hour early and only wait one hour?

As we crossed through the gates to pay for admission, I had no idea the extent of history that we were about to discover. Upon entering the catacombs, you find yourself going down a very narrow, spiral staircase that never seems to end. You keep looping down further and further into the earth. Finally, after having gone down 5 stories underground, you make it into the tunnels. 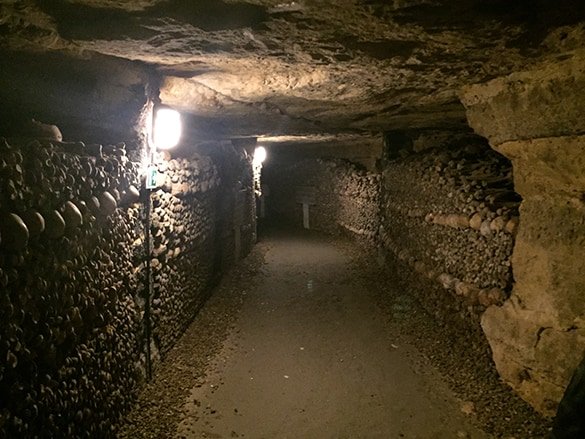 To me, learning the history of the tunnels was the most interesting thing about the catacombs. The tunnels were created in the 12th and 13th centuries. They stretch on for 200 miles under the city of Paris, and they serve as the primary reason why Paris can’t build its city up higher than it is, as it no longer has the foundation to support itself! Believe it or not, the tunnels of the Catacombs of Paris were forgotten until the 1600s, when they started caving in. Once the city began falling in on itself, they were discovered again. How can such an enormous maze be forgotten so easily? What else could be down there? My mind wandered on all the possibilities. The world really is a crazy place.

Upon having a problem with the cemeteries smelling and overflowing in the 1700s, the bodies were moved down into the tunnels. For a long time, the bodies were just thrown down there until Louis- Etienne Hericart de Thuy, head of the Paris Mine Inspection Service, turned the tunnels filled with bodies into a visit-able mausoleum. Some question his taste levels, as they bodies are arranged in very interesting ways, and, above the entrance to the ossuary, there reads a sign that says, “Stop! This is the empire of the dead.” You used to have to be blessed to go inside. Now, I believe that all the tunnels have been blessed so everyone can visit. 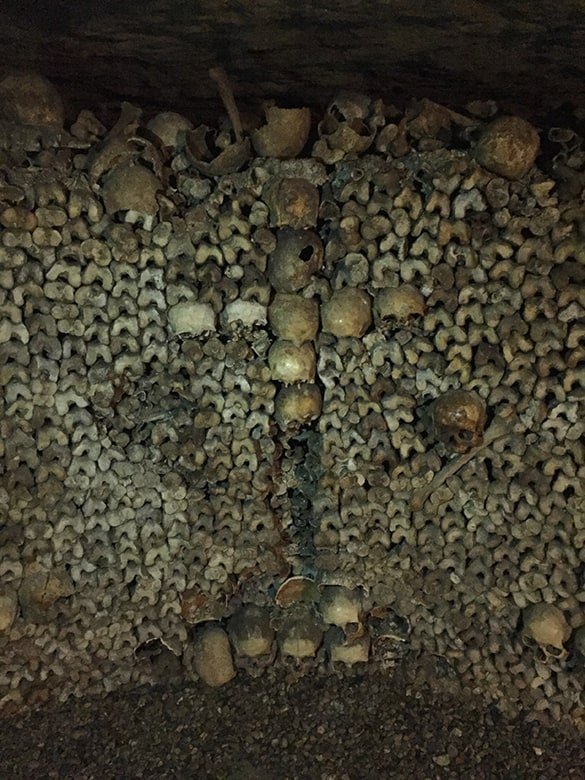 As I made my way down into the tunnels of the catacombs of Paris, I went through several passages that were dimly lit with water slowly dripping down the walls around me. The floors were slightly damp, and the air was stale. These tunnels were interesting and adventurous. They really allowed me see how the folklore of Paris- such as the Phantom of the Opera living under the city- can be so fathomable. Upon arriving to the section with the bones, I discovered that of the 200 miles that the catacombs stretch, only 1.1 miles of it contain bones. There are over 6 million bodies packed into 1 mile of passages. As you enter through the arch with the sign that reads, “Stop! This is the empire of the dead,” you immediately, on both sides, see walls of femur bones and skulls packed up onto each other, coming up to your head level. 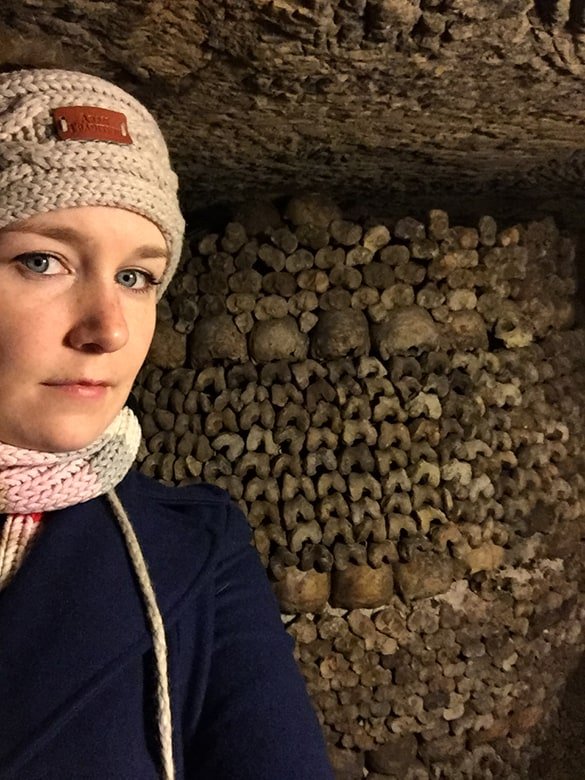 As I walked through them, I couldn’t help but feel how eerily still everything was around me. I noticed that most of the skulls did not have jaws. I noticed how packed together all the bones were, and I noticed the strange arrangements in which they were placed. Somehow, it was eerily beautiful. As you went deeper down, you would notice that headstones and monuments from the old cemetery were placed in there with the bones filling in the space around them. The bones were stacked on each other one small piece at a time. There were walls where the skulls were laid into cross designs, hearts, and other strange patterns. As we reached the end of the ossuary, there was a large round column made of bones, as well. The further you went through the passageways, the more you begin to question the taste level of the man who did this, treating the dead like art. It was beautiful, but it was definitely strange. As I had said, many had questioned the taste level of the design, and you’d have to be crazy to not start doubting that just slightly. 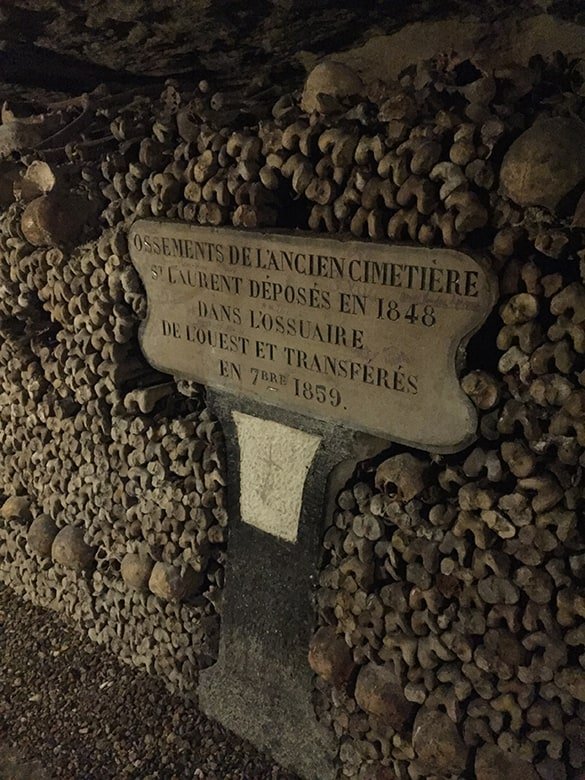 There was a cool breeze in the naturally still air as I reached the end of the catacombs of Paris. Upon arising back up another 5-story spiral staircase, I couldn’t help but stay in awe of what I had seen. I emerged on the streets of Paris directly above everything, and it was so lively. How surreal it was to know that there was a stagnant, cool system of tunnels stretching completely under the city, and the lively, loud city above it contrasted with that world entirely.

If you are ever in Paris, I really encourage you to check it out! It was something that I will never forget.