He’s Here! The Phantom of the Opera! (The Opera Garnier)

The story of The Phantom of the Opera has always interested me since I was young. It originated from a book by Gaston Leroux, who supposedly swore on his deathbed that the story was true. People have spent their lives studying the Opera Garnier, where the story occurred, trying to prove the truth behind it. Regardless, it brings a lot of people out to the Opera Garnier each year. My husband and I were no exception. 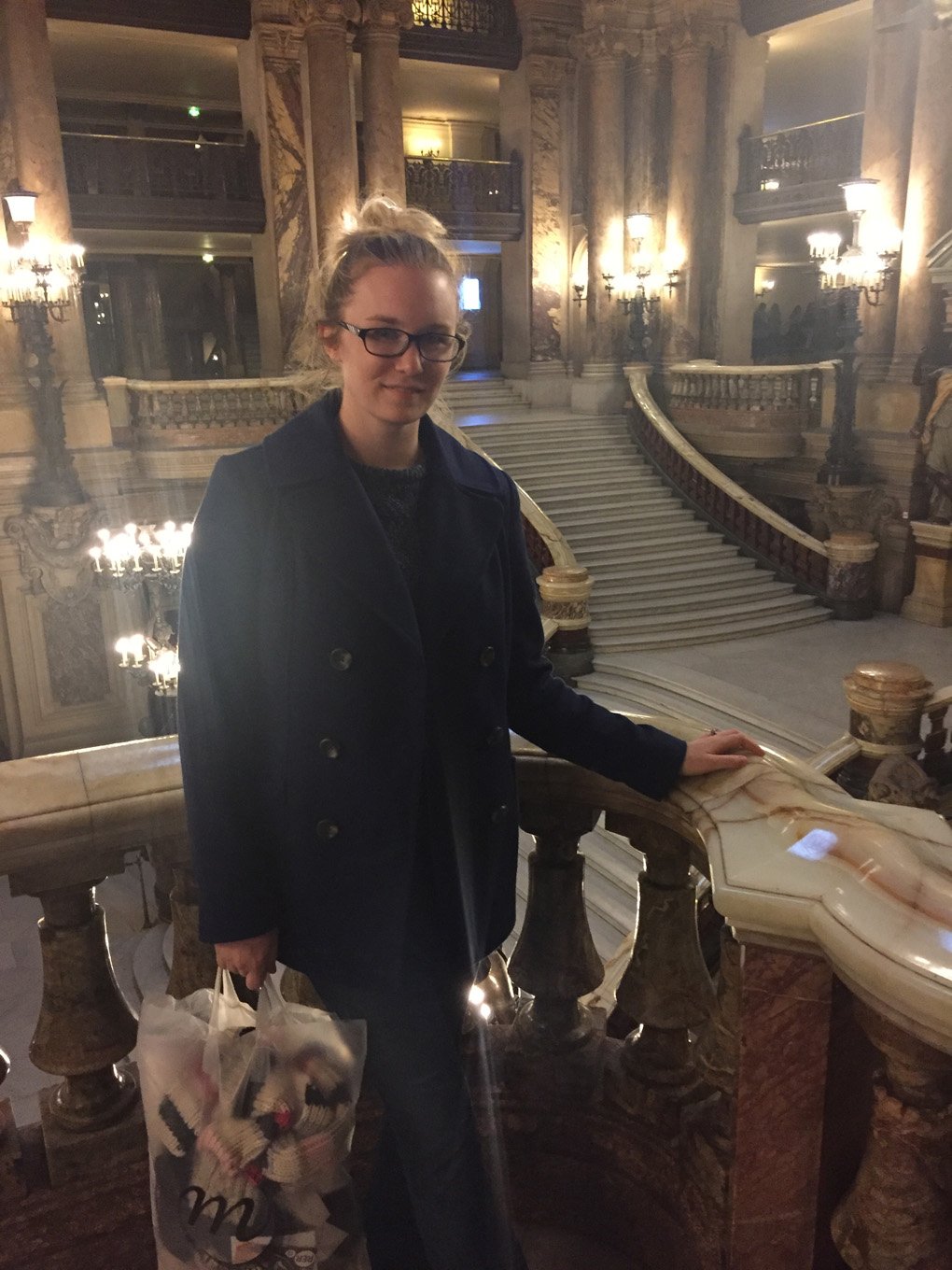 During our trip to Paris, I made sure to schedule an after-hours tour of the Opera Garnier so we could experience the exceptional beauty of the building without hundreds of tourists circling around us. We arrived early, so we were able to sit outside of the great structure and listen to a street musician as we awaited our tour. The names and busts of many famous musicians sat up high on the building of the opera, carved out of stone, and gold statues decorated the roof. We arrived as the building was being closed for the day and made our way in through the downstairs entrance hall. We met our tour guide shortly after, and she took us around the building. We learned that Charles Garnier was not a known architect when he designed the Opera. In fact, he more-or-less accidentally won a contest that gave him the title to create the Opera. Because of this, he hid many of his personal signatures around the place so people would know without a doubt that the Palais was his design. The most famous and easy to spot is his own bust that he placed at the top of the ceiling in the grand foyer. His face is in the design on one end, and his wife’s is on the design opposite of his own. He made sure that the people who came would know his face. 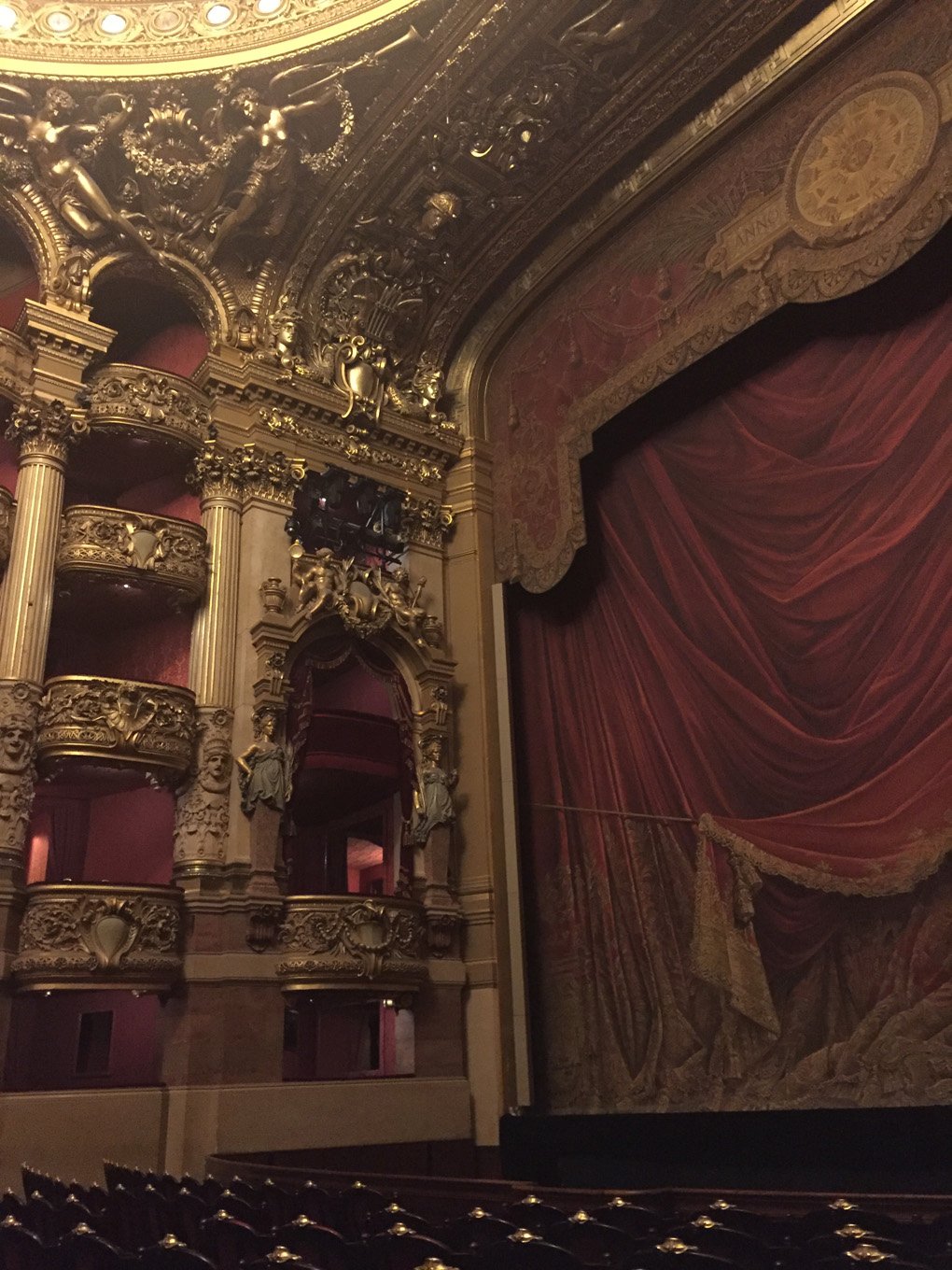 As we made our way up the famous Grand Staircase, we were shown a step where the marble had been broken. It seemed to have been broken by some kind of impact. The rumors and stories that have been passed down about that step all revolve around someone falling through the roof and down onto the stairs. (The history and stories that came from this place, alone, were worth attending to tour for.)

Once we made our way into the auditorium, we were blown away by the beautiful red seats and the enormous (and also quite famous) chandelier that hung over our heads. Our guide was quick to point out which box was Box 5, the famous box of the Opera Ghost a.k.a. The Phantom. She began to explain the social traditions of going to the opera back in that time, and that was perhaps the most interesting thing that I learned on our trip. You see, back in the late 1800s and early 1900s, going to the opera was purely a social affair. You either owned a box or a seat, which meant that you attended almost every show, or you rented for the night. Seat owners went out for each performance dressed to the nines. You could go up the grand staircase so you could show off your new outfits to everyone. Those who rented a seat for the night were not important and had to go up the back stairwells, where they couldn’t be seen. As a fun gesture, the seats still have labels on them saying which was an owned seat and which was a rented seat, though that isn’t something that is done anymore. 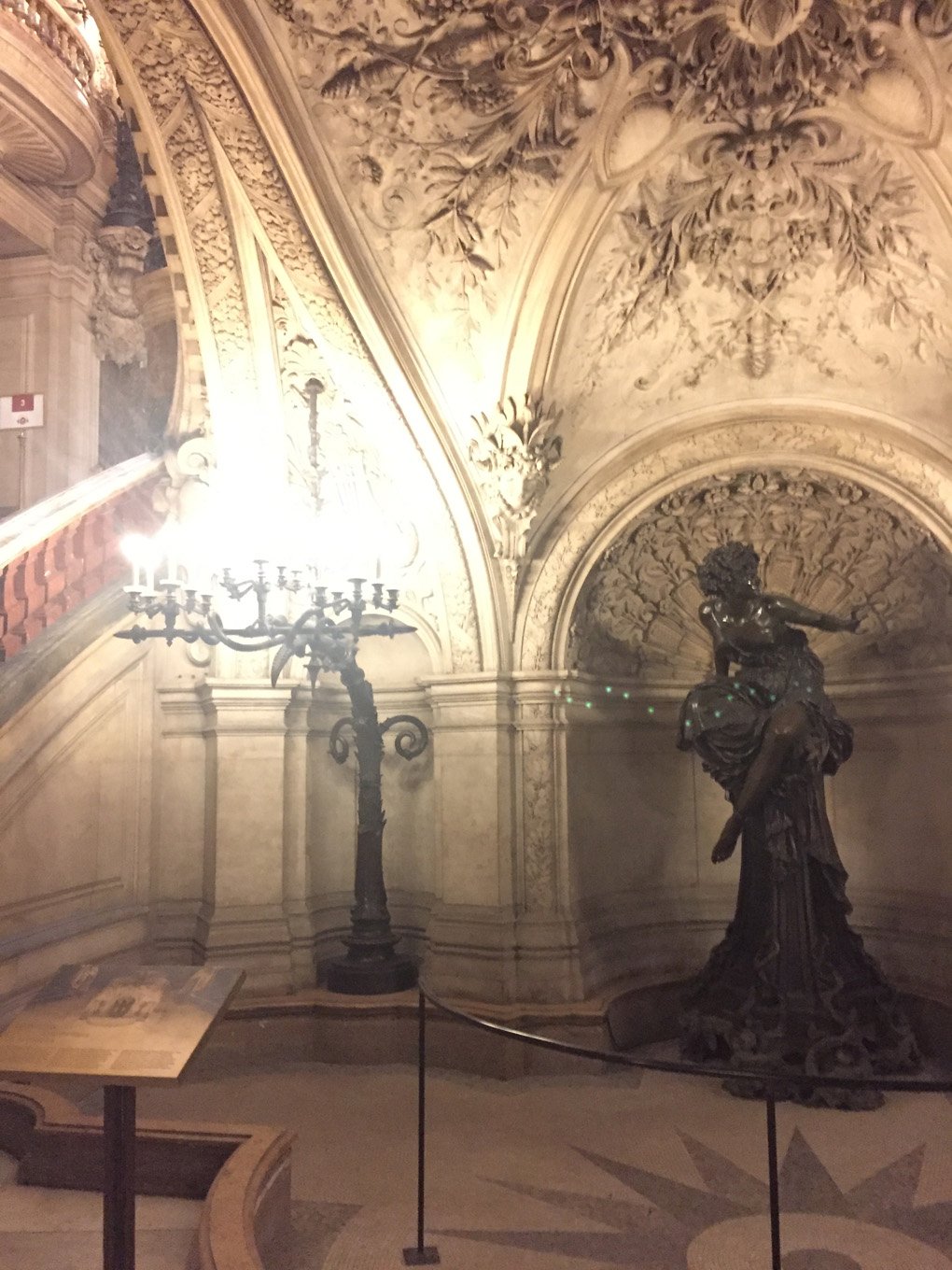 The boxes were, of course, for the wealthy. And, funny enough, the best seats in the house were in the boxes right next to the stage. Though it was hard to see the stage from there (and impossible with some seats), everyone could see you! That was the point of coming out to the Opera! To be seen! And, if you didn’t feel like being seen, you had a partition you could pull up to hide yourself. There were lounge rooms for dinner behind each box, so sometimes you wouldn’t be out in your own box at all. And, to top it all off, everyone talked during the show. It was normal for everyone to come out and socialize, so silence wasn’t really a thing that happened during a performance. Very interesting.

Finally, she talked about how the ceiling was replaced above the chandelier, and it was easy to tell. The style of the art up there did not match the rest of the Opera in any way. She had grown accustomed to it. We weren’t so sure about it. It was a little too modern to fit with the style of the rest of the building. 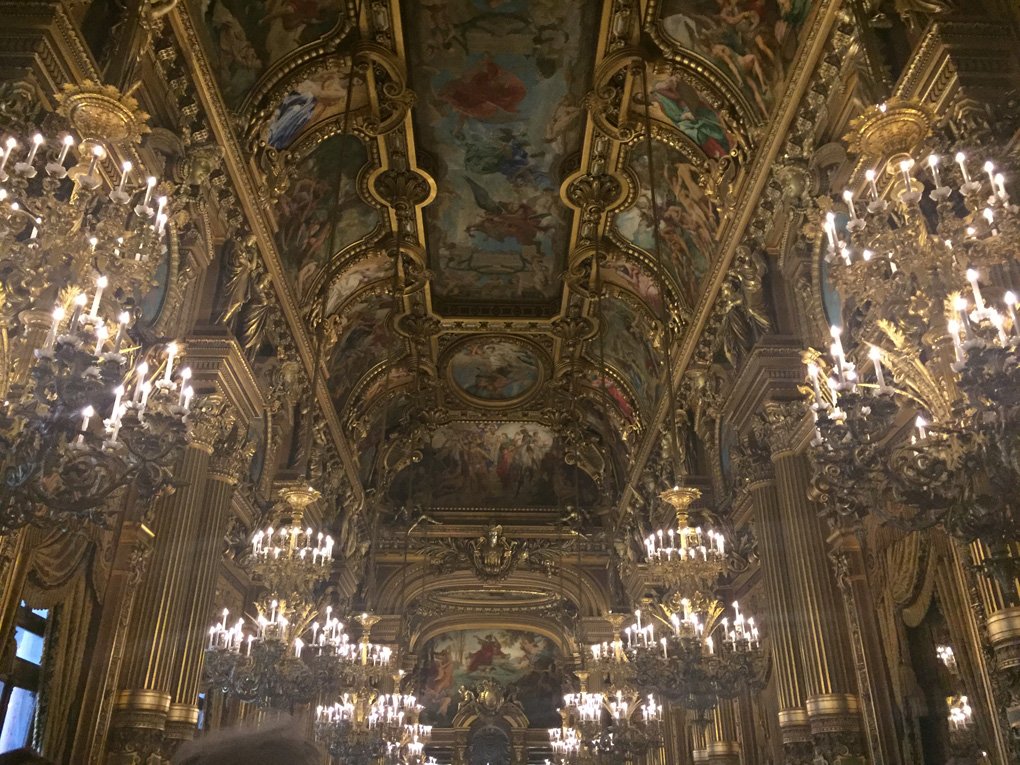 We then moved to the Grand Foyer where she pointed out the golden busts of Charles Garnier and his wife that I mentioned before. This was the most beautiful room of the opera by far. The ceiling was painted exquisitely in gold colors, and there were many chandeliers draping down. There was a dark fireplace at the end of the hall, as well. It was gorgeous.

Upon leaving, I could understand very easily why the Opera Ghost would make such a place his home. If you haven’t read The Phantom of the Opera by Gaston Leroux, I highly recommend it. Even better- see the Andrew Lloyd Webber adaptation on Broadway. But, above all, if you get the chance to see the Opera Garnier in person, I highly recommend doing so! It is a magical place glowing with history.